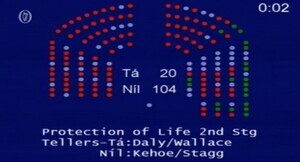 Yesterday Ellen Coyne, in the Ireland edition of The Times, reported that a consultant in Ireland advised mother-of-two Sarah – who had a nonviable pregnancy – to go to England for the first part of a termination and then return home and fake a miscarriage.

Sarah, and her partner, Michael (not real names) went to England with the intention of following the consultant’s advice.

However, upon arrival, the doctors told the couple they would have to contact Sarah’s consultant in Ireland to make sure she would induce Sarah and deliver the baby.

The doctors later informed the couple the consultant in Ireland told them she wouldn’t agree to treat Sarah.

The couple came back to Ireland and then returned to England for the full procedure. Their son was delivered at 24 weeks.

Sarah and Michael had to “smuggle his coffin on the ferry” home while Sarah later became seriously ill with sepsis.

Further to this, Ms Coyne reports today from Michael’s perspective and, specifically, about how Irish doctors are legally restricted from referring couples to hospitals in the UK.

“Everyone was sort of saying it, but saying nothing at the same time. We couldn’t get advice on that from Irish hospitals because they’re bound by Irish law, they explained that to us. We’d been told in roundabout ways about the options, and really the only option we had was to travel for a termination.”

“We had absolutely zero support here in Ireland. There was some people we could talk to, but essentially, by law, nobody could help us.”

“…It was very traumatic to think that we were essentially in three different hospitals over the space of a few weeks and it ended with Sarah potentially losing her life. This problem could have been dealt with so much further back.”

“That was very, very hard to take. It was worrying times for ourselves here. My future that was staring at me was being a single dad to the kids. Not alone losing Sarah, that would be agonising enough but just after that, the kids losing their mother.”

“…We could see that we were failed by the system. Ireland just doesn’t want to know. The main concern I have would be that Britain one day says, well, we don’t want to know either.”

‘After the diagnosis, the hospital turfed us out on the street’ (Ellen Coyne, The Times)

Previously: ‘I Was Told To Fake A Miscarriage’