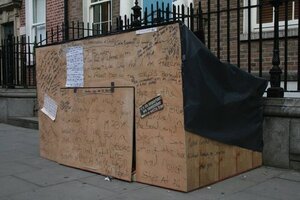 A homeless ‘shelter pod’ placed on Molesworth Street, Dublin (top) and being removed this morning (above)

You may recall how on the morning of February 15, 2016, homeless campaign group Gimme Shelter Ireland erected four ‘shelter pods’ across Dublin.

One was placed outside the Central Bank on Dame Street; one opposite the Dáil on Molesworth Street, next to where Jonathan Corrie died in December 2014; one beside Busáras facing the Custom House; and one on O’Connell Street.

The pod placed outside the Central Bank was removed later that day.

A homeless ‘shelter pod’ on Molesworth Street was demolished and removed by the council in the early hours of this morning.

It had been home to Columb Fogarty, a homeless writer who just last night detailed his experience living on the streets in an article he wrote for Lovin Dublin.

Columb was given just five minutes to clear out when the removal happened suddenly at 7am – and some of his belongings were still in the shelter when it was destroyed.