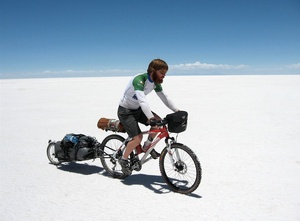 The LittleBIg bike(top) and its inventor Simon Evans (above), during a round the world cycle in 2010

With a fresh perspective on life.

But Simon Evans had a big dream about a little bike (that can be made bigger).

Broadsheet featued an article on my business when it was pre-startup. We’re now up and running and I wanted to share with your readers our journey.

In 2010 I completed Revolution Cycle, the first Irish circumnavigation of the world by bicycle, covering 31,000km and 30 countries over 18 months.

When I came back I found myself jobless (I’m a structural engineer) and in a totally different Ireland to the one I left in 2008.

I found temporary work in a local bike shop and while working there I spotted a potential opportunity for a growing kids bike. I thought to myself, kids won’t ever stop growing, so why not make a bike that can.

The LittleBig begins as a pedal-less balance bike for kids age 2+. No need for stabilisers, balance bikes allow kids to glide along effortlessly while quickly developing their coordination and motor skills. After the child has grown out of the small balance bike, the rear of the bike can be inverted, resulting in a bigger balance bike that accommodates for the child’s growth.

It took about 2 years to setup the business, develop the bike and locate a manufacturer that could achieve the high quality we were looking for.

Starting LittleBig bikes had even more ups and downs than pedaling around the world for 18 months, but now I’m absolutely delighted to have kids learning to cycle on a bike I’ve designed.

And I wanted to share that we have since had distribution requests in the four corners of the globe including the Caribbean Antilles, South Africa, South Korea, Japan and the USA, so it looks like I’ll be back traveling again. Thank you.