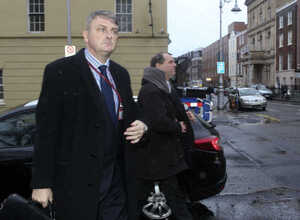 [GSOC chairman Simon O’Brien (left) with Kieran Fitzgerald of GSOC and on his way to attending the Public Service Oversight and Petitions Committee in February, to answer questions about the GSOC bugging story which is now the subject of an inquiry]

After the GSOC bugging story appeared in The Sunday Times on February 9, written by John Mooney, Mr O’Brien was summoned to the then Justice Minister Alan Shatter’s office on February 10, to brief him on the matter. Following that meeting, Mr O’Brien released a statement apologising for not telling Mr Shatter about the investigation that GSOC had carried out by Verrimus. Verrimus had detected three security threats.

In his statement, he said: “We did not wish to point fingers unnecessarily and we did not believe that widespread reporting would be conducive to public confidence.”

Then, on February 12, Mr O’Brien appeared before the Public Service Oversight and Petitions Committee and told the committee:

Separately, in his investigation of Sgt Maurice McCabe’s dossier of claims of Garda misconduct, Sean Guerin, SC, referred to the role of GSOC in the recent Guerin Report.

In the introduction of his report, Mr Guerin said he received no documentation from GSOC. He said on the eve of the day his report was due he received a letter from Arthur Cox Solicitors, on behalf of GSOC, stating  there were legal and practical issues with handing over, according to GSOC, “voluminous” relevant documentation.

“That has, unfortunately, been an obstacle to any assessment as part of this review of the adequacy of the investigations conducted by GSOC.”

“What is striking, however, is that in the one case in which it is clear that a GSOC investigation was pursued to a conclusion, the papers I have seen suggest that the approach adopted by GSOC was ultimately broadly similar to that of An Garda Siochana…While the independent investigative function that GSOC exercises is an important one in the public interest, it appears to be no guarantee of a disciplinary outcome.”

O’Brien:  “Ah gee, look, Martin and I have a professional relationship, had a professional relationship, absolutely no problem sitting down with Martin and having a cup of coffee, I did that on a number of…on a regular basis.  Just think about where we were within that – you know, there was a controversy flowing around us. Martin phoned me up and said, ‘Would you come over and we’ll have a chat about things…”  I’ve got no problem with that, I’ve got no problem with that at all.  As he has said, and as I have said in the past, there’s always been a healthy tension between the two agencies – that’s fine.  But, I have to say to you I have no problem sitting down and having a cup of coffee with Martin Callinan.”

Yates:  “How would you characterise that relationship with the Commissioner – was it too cosy, was it too submissive on your part?” END_OF_DOCUMENT_TOKEN_TO_BE_REPLACED