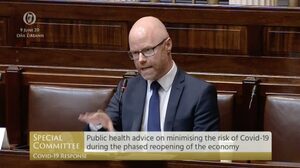 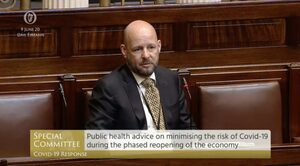 At the Special Committee on Covid-19 Response, Fianna Fáil TD Stephen Donnelly had the following exchange with Professor Philip Nolan, president of Maynooth University, while Mr Donnelly was asking him about the letter published yesterday involving more than 1,000 researchers and scientists calling for the curve to be crushed.

Philip Nolan: “The strategy is not one of mitigation, I made that clear in my opening statement and NPHET has made it clear in public, it’s not a question of living with an ongoing, significant level of transmission of the virus. The strategy is one of suppression. Suppressing the virus to very low levels…”

Stephen Donnelly: “Sorry, again, just in the interest of time, I just want your opinion as to whether or not they’re right.”

Nolan: “So my opinion is that the strategy, as laid out, as recommended by NPHET to Government and as adopted by Government is the right strategy for this country at this time. I just…”

Michael McNamara (chair): “Well, it’s not really, I mean I think he has to be allowed to answer his question. Then you can come back in.”

Nolan: “And what I’m telling you is that in the face of incomplete information, different scientists will have different views. NPHET and Government are charged with putting in place a response that’s timely, proportionate…”

Donnelly: “No, sorry, look, we know all that. So in your opinion, am I safe in saying  that you disagree with them?”

Nolan: “I’m giving my view. My view is that the recommendations of NPHET, for how Ireland should manage this pandemic, are the correct recommendations. I support them. They accord with my own judgment and the judgment of my team. And the point that I want to make is no strategy utterly insulates us from the virus reemerging in our society.”

Donnelly: “We all understand that. Thank you. Can I ask you: how likely is a second wave in your opinion?”

Nolan: “So. It’s probable that at some point in the future the incidence of this disease will increase again in our society. How big that increase will be, when it will happen, how difficult it will be to manage is very hard to to predict. But there is something that I can tell you: just one output for instance of a modelling study.

Donnelly: “Yeah, I know, sorry, just in the interest of time, I’m not trying to be rude. The question I’m asking: I know there is a lot of uncertainty and I know scientists have different views. But you’re the guy leading the modelling work. I’m asking, in your opinion, have…”

Nolan: “And I was about to give you…”

Donnelly: “How likely is a second wave and when might we expect it?”

Nolan: “I want to be very careful with the term ‘a second wave’. Second wave gives the public the impression that some overwhelming reoccurrence of the disease will wash over them into the future. What we do know is that across Europe, there will be renewed outbreaks of the disease of varying size. You could describe them as small second waves or you could describe them as manageable outbreaks. So my view is that we will, across Europe, perhaps somewhat randomly see new outbreaks of disease which we’ll be required to monitor and make sure that they don’t become very significant second waves. And public health colleagues will be required to intervene and control so that the disease doesn’t spread beyond that manageable outbreak.”

Donnelly: “Thank you. Can I ask, how likely, do you think, we are to see a second wave of sufficient scale that we would have to look at closing schools down again, closing businesses down again, restricting civil liberties again. That really is the question a lot of people want an answer to. And I know there’s no perfect answer. I’m just looking for your opinion. ”

Nolan: “I’ll say two things in response to that. First of all, the management of any second wave will be different from the management of the first wave. The wave is likely to be different and we know an awful lot more about how to manage this virus than we did the last time. So one might imagine that there could be more targeted measures introduced to control future outbreaks before the sort of blanket measures that we’ve seen in this context.

“I’m not evading it. I simply can’t give you a probability for a second wave. How likely is it or how unlikely is it.”

Donnelly: “I’m not looking for a number, I appreciate that would be an impossible questions for you to answer. Do you think that it’s extremely unlikely, do you think it is highly likely or have you absolutely no sense how likely it is?”

Nolan: “Honestly, I think it’s possible it would be arrogant of me. We can’t predict the future. And people who do my kind of work and Cillian’s kind of work, we need to be humble. There’s lots we don’t know. So, right now, on a precautionary basis, we need to plan as if it’s possible and make sure we have all of the contingency plans in place to deal with a tough scenario should it eventuate in the future.”

Nolan: “I think this virus will, I think our behaviours will continue to be modified by this virus for some time to come.”

Donnelly: “Sure, but would you see schools, restaurants, businesses opening up to full capacity by the end of the year? The healthcare system?”

Earlier: Meanwhile In The Dáil 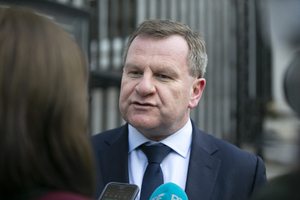 This morning from 11am.

The Special Committee on Covid-19 Response will meet and hold three sessions.

Between 11am and 1pm, Dr Cillian De Gascun, Director of the National Virus Reference Laboratory, and Professor Philip Nolan, president of the NUI Maynooth will go before the committee.

Between 2pm and 4pm, the CEO of IBEC Danny McCoy and CEO of ISME Neil McDonnell will address the politicians.

Mr McCoy is expected to call for the immediate removal of Covid-19 quarantine restrictions and the reduction of the two-metre social distancing guideline to one metre.

Between 4.30pm and 6.30pm, the CEO of Enterprise Ireland Julie Sinnamon and Secretary General of DBEI Dr Orlaigh Quinn will go before the committee.

Today’s appearances before the committee follow more than 1,000 Irish researchers signing an open letter to the Government yesterday, calling for an extension of lockdown restrictions in order to “crush the curve”.

The two metre rule is under sustained pressure today – @RAI_ie and @ibec_irl both want it reduced to one metre, saying it would save hospitality jobs. 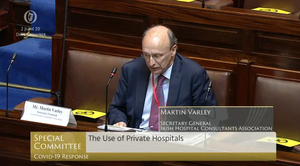 In his opening statement to the Dáil Special Committee on Covid-19 Response, Martin Varley, Secretary General of the IHCA, said there has been a “very low” private hospital bed capacity occupancy at around one third on average.

Mr Varley said the private hospital contract is prohibiting the provision of urgent care required by patients with non-Covid illnesses.

He said this is leading to the accumulation on waiting lists of a large number of patients who require urgent care.

Mr Varley warned there is now the additional risk that these patients will deteriorate clinically and will increasingly evolve into emergency cases if they are not treated without delay.

He called for the contract with private hospitals to be brought to an end and the savings achieved utilised to put increased capacity in place for public hospitals. 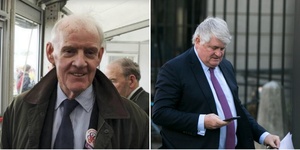 The Special Committee on Covid-19 Response will discuss the State’s renting of private hospitals. The discussion will continue from 2pm until 4pm.

From 4.30pm until 6.30pm, it will discuss the travel restrictions.

Watch live here or in the link above 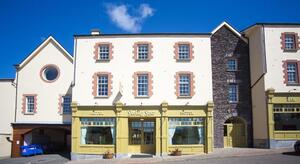 The Special Committee on Covid-19 Response will meet in the Dáil chamber.

They will discuss the Government’s response to Covid-19 in nursing homes, in the first two sessions at 11.10am and 2pm respectively, and direct provision centres, in the third session at 4.30pm.

Some 54 per cent of the 1,606 Covid-related deaths in Ireland took place in nursing homes, while there have been 13 clusters and 171 cases overall in direct provision centres. At least 25 residents of the Skellig Star Hotel in Caherciveen, Co Kerry (top) which was turned into a direct provision centre in March, have tested positive.

It’s being reported that Nursing Homes Ireland CEO Tadhg Daly will tell the committee, in his opening address, that “the dismay will live forever with us” and:

“We were exasperated. The sector required a specific plan. We knew that Covid-19 disproportionately impacts on older people. The planning and focus was almost exclusively on our acute hospitals. Multiple clusters initially emerged in our hospitals. But the numbers in nursing homes started to increase.”

According to the meeting’s schedule, those appearing before the committee include CEO of Nursing Homes Ireland Tadhg Daly, Executive Director of Sage Advocacy Mervyn Taylor, CEO of HIQA Phelim Quinn, and representatives from the HSE and the Department of Justice.

The committee meeting can be watched above or here

Meanwhile, a transcript of last week’s committee meeting can be read in full here.

Previously: Covid 19 And Older People: A Shameful Time For Change

An Uncomfortable Truth Out Of Sight 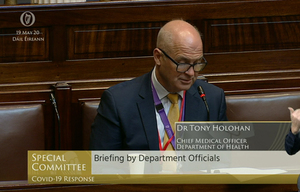 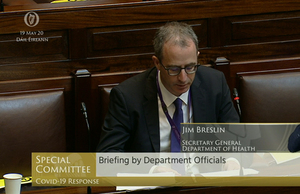 The Special Committee on Covid-19 Response  )is currently in session and will sit in the Dáil over three sessions.

The Irish Times reports this morning that Mr Breslin will tell the committee, in his opening address:

“We need to be aware that we will continue to be in the acute emergency phase of this crisis for some time, with further waves an ever-present danger. This is not a one-, two- or even a three-day storm, after which we move to the recovery phase. The acute phase of this crisis will definitely be measured in months and most probably in years, rather than days.”

The Irish Times also reports that the Senior Civil Service Association wrote letters yesterday warning that is members must be protected from “aggressive or bullying behaviour, contrary to fair procedure and nature justice” when they go before the committee.

CEO of the HSA Dr Sharon McGuinness, General Secretary of ICTU Patricia King and Director General of the CIF Tom Parlon will also go before the committee.

The committee’s proceedings can be watched live here or in the link above.