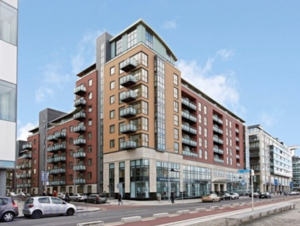 Susan Ryan, aged 41, was due to be evicted “by appointment” from her apartment at Longboat Quay North in Dublin 2 on Monday, October 21, 2013.

Ms Ryan had fallen into mortgage arrears with her lender understood to be Ulster Bank.

Gareth Naughton, in The Herald, reports:

Mr Gray [Dublin City Sheriff’s Office court messenger Paul Gray] knocked on the door a number of times and called out Ms Ryan’s name but there was no response.

Using a key provided by the bank official, they entered the apartment.

Gda [Bronagh] McArdle  [present to ‘ensure there were no public order issues’] said that on entering the bedroom she found Ms Ryan “visibly pale in colour and was cold to touch” with no pulse detectable.

“There was a substantial amount of empty medication trays piled up at the bedside,” she told the court.

The dead woman had spent the weekend in Wexford visiting her mother along with her sister Barbara Ryan, who told the court that everything had been “normal” with nothing out of the ordinary happening.

…Coroner Dr [Brian] Farrell said that, from pictures of the apartment, [Ms Ryan] appeared to have been living on “convenience foods”.

Woman took her own life on night before eviction (The Herald)