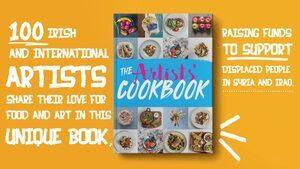 Brothers Andy and Calvin, of Syrias Vibes and The SCOOP Foundation, write:

We will be launching The Artists’ Cookbook with a huge event in Airbnb’s European Headquarters at Grand Canal Dock in Dublin, followed by an after-party in nearby Charlotte Quay.

It’s free in and each attendee gets a free copy of the cookbook (worth €25). There will also be complimentary canapes from the Airbnb chefs, free wine and beers courtesy of Rascals Brewing Company.

Raising funds for the doctors and ambulances at Raqqa, Syria and for the Psychology Programme in the Bajed Kandala camp on the Iraqi border. 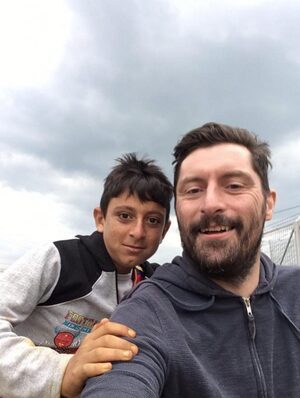 Calvin James, of Dublin, left, with a young boy, at Dohuk in Iraqi Kurdistan

Irish charity Syrias Vibes is fundraising so it can support a psychologist working with Yazidi women and children in northern Iraq.

It follows the psychologist’s contract with an Italian NGO finishing a number of weeks ago.

We want to support an incredible psychologist working with Yazidi children affected by the war or who have been returned from captivity in dire need of psychological attention and care.

In short 5,000 men and young boys were systematically murdered in IS’ ‘Convert or Die’ campaign and a further 7,000 women and children were abducted and sold into captivity.

Many have managed to escape their captors yet up to 3,700 remain in captivity. As coalition forces advance on IS’ capitals in Iraq and Syria, there is a slow stream of survivors escaping or being bought back by their families, usually at extortionate prices.

This service is rarely afforded to them as the NGOs operating in the crisis face funding difficulties so we’ve decided that the best way forward was to hire a psychologist to work directly with Yazidi survivors. Our psychologist will see a caseload of 25 service users a month.

I’ve just spent a month in Bajed Kandala Camp in Northern Iraq. The camp is currently home to 7,000 Yazidi internally displaced people who were forced to flee their home in Sinjar after the genocide by ISIS in 2014.

On returning to their families, there is little support offered by means of counselling or psychiatric support.

Cases are referred to her from the hospitals operating inside the camp and when necessary she will prescribe medications and refer service users to Dohuk Hospital.

At Syrias Vibes, we will dedicate ourselves in running this programme for as long as its needed.

We ask that you please support this campaign anyway you can.

Those who wish to donate can do so here