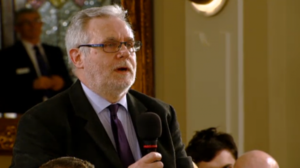 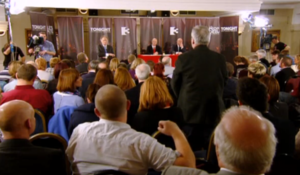 Tom Curran, husband of the late right-to-die campaigner Marie Fleming, asking a question at the Tonight With Vincent Browne debate in Wicklow

The People’s Debate with Vincent Browne is touring the country, holding debates in Ireland’s 40 constituencies and, last night, the Wicklow debate, which involved Independent TDs Stephen Donnelly and Billy Timmins, was broadcast.

Mr Timmins lost his Fine Gael parliamentary party whip, along with Lucinda Creighton and others, after he voted against the Protection of Life During Pregnancy Bill 2013.

He has yet to say whether he will be joining Ms Creighton in her new party.

At the end of last night’s debate, Vincent took questions – or ‘rants’ as he called them – from members of the audience.

Tom Curran, whose wife Marie Fleming passed away in December 2013 after her unsuccessful right-to-die challenge in Supreme Court in April 2013, asked a question.

Tom Curran: “[This is] not a rant, it’s a very simple question for the two…”

Vincent Browne: “Give your name and affiliation.”

Curran: “Tom Curran, I am the partner of the late Marie Fleming and I’m a healthcare activist. During the court case, the historic court case that Marie took to the Supreme Court, in the judgement in that case, the Chief Justice made it clear that the Oireachtas had the power to bring in legislation to effect assisted dying. The last poll that was taken on this issue, in fact was done by TV3 and 80% of the people that were polled was in favour of assisted dying for the terminally ill which, to me, is a mandate. I’ve been working for the last 18 months with four barristers and a number of healthcare professionals on drafting a Bill. That Bill will be presented in the Dáil in the near future – will the two deputies support it? And will you, representing the Government, give your view on what the Government parties will do?”

Donnelly: “The very brief answer is, Tom, yes. When it happened I raised it directly with the Taoiseach in the chamber and not only will I be voting for your Bill but I will be supporting it wholeheartedly.”

Billy Timmins: “The answer I’d like, I’m not sure, I honestly really don’t know, Tom. I know your difficult circumstances and difficult situation and one can certainly understand the difficulties that are there. I would actually, it’s an issue I, I’m open on and I’ve an open mind on it. And it’s not a case of being afraid of coming down on one side or the other, it’s something I really need to look at, look at the content, the contents and the context of the Bill and illicit other views on it but I will come back to you and tell you certainly before the Bill actually comes into the Dáil what my position is going to be.”