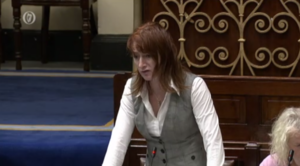 “You have made a very serious mistake here today. I think it is an historic day, as the minister said. Ye had an opportunity to listen, ye had an opportunity to step back and abolish the charges and Irish Water. You haven’t taken that opportunity. And the reality is, is that no one can govern against the will of the people. And you’ve lost the will  and the mandate of people and, honestly, your days are now numbered. And if you had any respect for yourself, you really should go to the people and call a general election because we’ve had to listen to a lot of waffle about democracy, from the Taoiseach over the weekend, aided and abetted by some of his friends in the media, trying to discredit a people’s movement, trying to insult people? That they would allow themselves to be led by a sinister fringe? Where was the coverage to the 200 women in Coolock who peacefully protested outside the [Garda] station last night?”

“Those who are undermining democracy are not in the communities, they’re sitting across the way there because ye went to the people. You said, ‘vote for Labour and we’ll save you from Fine Gael’s water charges’. Fine Gael said, ‘vote for us and we’ll never bring in a charge unless meters are in’. That’s not democracy, that is fraud. And you have betrayed the people of this country, you’ve succeeded in awakening a sleeping giant of the Irish people. And, do you know what, now that they’re awake, they actually like it and they’re not going back into their box. December the 10th will be absolutely enormous, in my opinion. I don’t think you’ll survive it, unless you cop on before that. But if you try and limp along, after that date, you will find that this charge will be absolutely uncollectable by the time you try and bring it in and collect that in April. But I strongly suspect that it’s not going to be your problem because you’ll probably be gone before then.”

The official transcript on Oireachtas.ie.