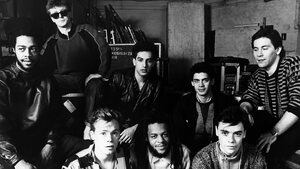 Last Friday, we asked YOU, our Broadsheet commenters, to furnish us with your favourite tunes-you-used-to-hate, for us to pick from for playing today. In fact, we asked:

The competition as ever was stiff, but only one contestant could bring home the twenty-five-euro voucher courtesy of Golden Discs… Spaghetti Hoop, with a rather personal entry.

I played the album as a kid while the sister was out and I accidentally warped it by leaving it beside the radiator. The fall-out was terrible for me; I was in so much trouble and had to do so many errands to make up the price of the ‘LP’ . I never wanted to hear UB40 again. The only song that could be played after I warped it was 1 in 10; the disc was so contorted that the needle would fly off into space but would settle on 1 in 10 which was in the inside of the disc.

It was at the same sister’s funeral in 2015 that I heard 1 in 10 again; she was, coincidentally, the 1 in 10 that die of lymphoma cancer every year.

The song does not make me sad about vinyl-warping or death; I think it’s just about people who are under the radar and want to be. I want to be 1 in 10 not 9 in 10. I love the song now, for it’s darkness and eighties multi-racial band that UB40 were.

Other highlights from the running:

BROADSIDESKID: “I bought John Coltrane’s A Love Supreme (unheard) in 1990. I was so excited to play it. I put it on, and to my young ears it sounded like a full dishwasher being pushed down a flight of stairs. Cut to 2016. I bought a secondhand copy on CD purely to see if it was really as bad as I remembered. I couldn’t believe how melodic, soulful and wonderful it was. Now, it’s an album I listen to all the time.”

HAPPY MOLLOY: “At one point in my life I could not listen to Kenny Rogers as I thought he was pretty naff, as was anything country and western related (this of course being pre-my Johnny Cash awakening), but now I love a lot of his songwriting, like the heartbreaking Ruby that I never really listened to, and the wonderful Coward of the County, that confirmed for me that there are certain, quite extreme, situations when you gotta fight to be a man.”

STARINA: “At one point in my life (when I was a spiky teenager who thought all female singers were either trying too hard to butch it up or were folky fartwads, with the notable exception of Shirley Manson and Courtney Love – I also thought feminists hated men, LOL what a dumbass) I sincerely could not listen to Tori Amos but now enjoy her sounds, in particular the first three albums. You can see her moving lyrically from viscerally-relatable coming-of-age lyrics through darker story-telling to being a battle-scarred but strong woman. I love her SO much now and I really wish I had given her a chance as a teenager cos her music woulda helped.”

CHRISTOPHER CARROLL: “At one point in my life I sincerely could not listen to R.E.M. I associated them with simplistic, sentimental pop like Shiny Happy People and Everybody Hurts – but now enjoy their/his/her sounds, in particular the early albums Life’s Rich Pageant and Fables of the Reconstruction, which have a raw, raging pulse that’s completely distinct, foreshadowing the grunge movement to come.”

MARK1: “At one point in my life I sincerely could not listen to Fleetwood Mac (post-Peter Greene) but now enjoy their sounds, in particular Go Your Own Way. I think discovering in later years what a crazy bunch of people they all were when making Rumours has endeared them to me.”