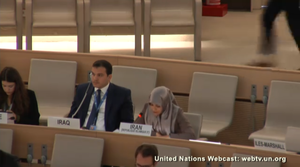 “The Islamic Republic of Iran is gravely concerned about the high rate of racial discrimination, related intolerance and racial profiling, especially against Muslim people and people of African origin in Ireland.”

“We know the measures taken by Irish government to address these human rights however we share the Committee on the Rights of the Child’s concerns regarding the state of health of children in single-parent families, children in poverty, Travellers, Roma children is significantly worse than the national average.”

“Therefore we would like to make the following recommendation to Ireland: to put in place a robust mechanism in order put an end to racism, discrimination and related intolerance, especially against Muslim people and people of African origin…”

A representative from the Islamic Republic of Iran speaking at the UN Human Rights Council in Geneva this afternoon.