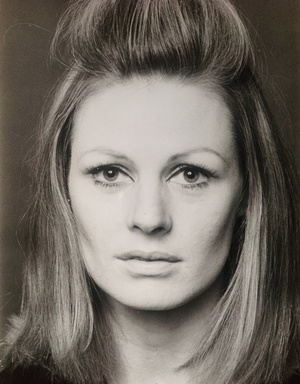 Further to yesterday’s post about Verona Mullen comes this photo from her niece Martina Mullin who writes:

My granny died about fifteen years after Verona and my dad found this photo among my granny’s things.
Verona modelled in Ireland and Europe. I’m not sure how long for. She did a degree in English in New York.  After her degree she was doing a masters or phd in Harvard but as I mentioned she got sick [with breast cancer].  I think she was trying to treat it naturally or homeopathically but after ten years it got the better of her. I think she died in Barcelona because her long term partner worked in Spain. He was a doctor and was possibly helping to treat her.
One story my uncle told me that I loved is as follows: Verona rang my granny when Aran jumpers came into fashion and asked my granny to knit her one.  My granny was delighted thinking Verona was getting sense at last and giving up on all that high living she was doing in Dublin. My granny knitted the jumper it and sent it to Verona in Dublin.
Verona arrived down to mass on Christmas Eve wearing it and nothing else!  It was a great Christmas for the bachelor farmers of north Leitrim!

Previously: Verona Mullen: What Happened next 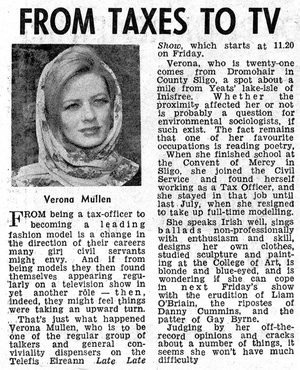 You may recall the post a couple of weeks ago about the first ever Late Late Show line-up from 1962, which featured the incredibly striking Verona Mullen.

Whatever happened to her?

My dad’s going to love it [the post]. Verona was his sister. She is no longer with us so he and his brothers and sister will be delighted with this stuff. In answer to your question she is buried in Barcelona.  She got breast cancer at 32 and died aged 42.  She was doing a masters or PHD in Harvard when she got sick so that kinda puts Gaybo in his place.  She said before she died that her greatest regret was that she didn’t use her good looks to marry an accountant.  Sure isn’t that all any woman wants!