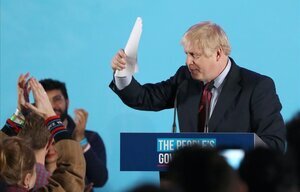 “Thank you all, thank you very much for coming. Well my friends, good morning everybody, my friends.

“We pulled it off.

“We broke the deadlock, we ended the gridlock, we smashed the roadblock.

“And in this glorious, glorious pre-breakfast moment, before a new dawn rises on a new day and a new government, I want to first of all pay tribute to good colleagues who lost their seats through no fault of their own in the election just gone by.

“And I, of course, want to congratulate absolutely everybody involved in securing the biggest conservative majority, since the 1980s…which was, literally, literally, as I look around, literally before many of you were born.

“And with this mandate, and this majority, we will at last be able do…what?”

The crowds respond in chorus: “Get Brexit done.”

Mr Johnson then carried on:

“This election means that getting Brexit done is now the irrefutable, irresistible, unarguable decision of the British people…”