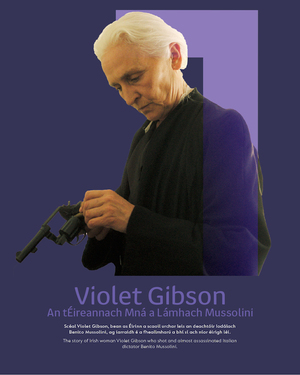 Violet Gibson – An tÉireannach Mná a Lámhach Mussolini (The Irish Woman who Shot Mussolini) gets its inaugural TV screening on TG4.

“After the radio documentary The Irish Woman Who Shot Mussolini (2014) produced by my wife Siobhán Lynam, won a Gold Award at the New York Festivals World’s Best Radio Programmes, I decided to adapt the story as a Documentary Feature Film for theatrical release

“I was fascinated with Violet’s story from the very beginning. I wondered how might this distinguished woman have altered the course of world history if her pistol hadn’t jammed. I thought if she was a man she would be celebrated as a heroic visionary with a statue erected in her honour.”

Violet Gibson – An tÉireannach Mná a Lámhach Mussolini on Wednesday, September 22 at 9:30pm on TG4. 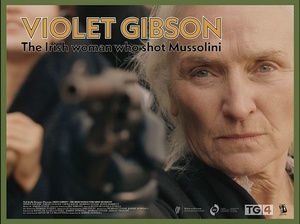 The documentary drama Violet Gibson, the Irish Woman Who Shot Mussolini (2020) is showing.

Violet Gibson was the Irish woman who shot Mussolini. Had he not moved his head at the last moment, ensuring the bullet merely pierced his nose, history could have been very different.

My film about Violet is showing this Sunday online From 1pm, via the Kerry International Film Festival: )

Gibson was born in Dalkey, daughter of the Lord Chancellor to Ireland, and grew up as part of the “high society” of the day. Rejecting that, she went to Italy in 1924 and hatched a plan to assassinate Mussolini.

She approached him at a rally, got right up to him, drew her gun and shot. After the attempt failed, she was set upon by the fascist mob, but was saved by police. The fascist authorities didn’t want the publicity of a public trial, so she was deported to England.

But neither the British authorities nor her own family wanted anything to do with her. She spent the rest of her life incarcerated in Northampton Mental Hospital in England, largely forgotten, dying in 1956.

As with many women perceived as difficult or dangerous, the response was to silence her. She was effectively written out of history. This is the first film about her. It stars Olwen Fouéré  as Violet. 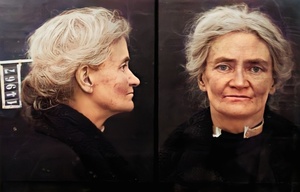 Via Ireland in Colour

Irish woman Violet Gibson shoots [Benito] Mussolini in the nose as he walks among the crowd in the Piazza del Campidoglio in RomeBorn 1876, Dublin…Daughter of Irish lawyer/politician Baron Ashbourne…Lived rest of life in St. Andrew’s Hospital…Died 1956.

The Irishwoman Who Shot Mussolini (RTÉ Documentary on One Podcast)