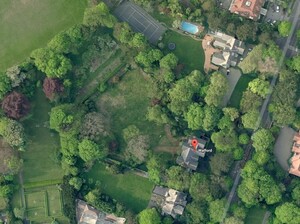 Walford, Shresbury  Road, was purchased by Sean Dunne and Gayle Killilea for €58 million in 2006.

Their plan was to build four more properties out the back and triple their money. Or something.

But that was then.

…In its decision refusing permission for the entire development, the board described Walford as an example of the ‘Arts and Crafts’ style from the early 20th century and Shrewsbury Road as being of unique character in Dublin city.

It said development in the garden would interfere with the historic design of the house and its parkland setting.

Planning consultant Dr Diarmuid Ó Gráda, who acted for one of the objectors, said it was a sophisticated decision that looked at the whole streetscape.

“It’s an important decision for the culture and heritage of Dublin,” he said.