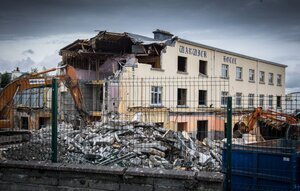 The Warwick Hotel, Salthill, Galway demolished to make way for a nursing home.

The Warwick hotel…..memories keep flooding back. So many great nights, as a punter and playing on that stage . I’m now officially a sad old bastard full of nostalgia for my youth.

The demolition of ‘The Warwick’ in Salthill has me trawling through my old b/w negatives. Here’s a real rock’n’roll one. ‘The Golden Horde’ in dressing room of The Warwick circa 1989/90. pic.twitter.com/zeqc9nNSXr

Another memory from ‘The Warwick’ in Salthill… David Gedge of ‘The Wedding Present’ selling t-shirts (£7.00!) after playing The Warwick circa 1992 I think. #TheWarwick pic.twitter.com/CCbiyKwW8x