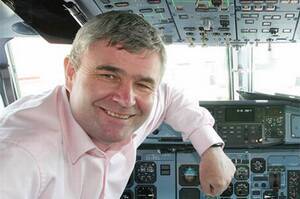 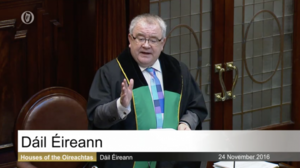 The Dáil was suspended after AAA-BPB Mick Barry raised the selection of Independent Senator Pádraig Ó Céidigh (top)  – who was nominated for Seanad by Fianna Fail leader Micheál Martin – as chairman of the new 20-member water charges committee.

Martina Fitzgerald, of RTÉ, reported on News At One:

“Basically, they’re unhappy that Padraig O’Ceadaigh was selected rather than elected as chair of this special water committee that’s going to to examine the findings, the recommendations of the expert commission that’s currently looking at the funding of water and, remember, that’s due back next Wednesday, so obviously tensions are rising.

“But, ultimately, it was decided last week that there would be 20 members on that committee. Obviously, 16 are going to be coming from the Dáil, four from the Senate. But it was decided, I think, most people are suggesting it was a Fianna Fail and Fine Gael deal that Padraig O’Ceadaigh would be the chair. Now he’s from the Senate so already, that’s one element to it so Sinn Fein, People Before Profit, and my understanding from someone in Labour there, are also not happy about it.

“But also, he is a senator, so if you have four senator positions, you’re one down and you have Fianna Fail, Fine Gael are going to have a position on this, from the senators’ point of view and  we’re hearing that the Civil Engagement Technical Group are going to have another. So, in the Seanad membership of this committee, 20 members – four senators – Sinn Féin won’t be on it and neither will Labour.”