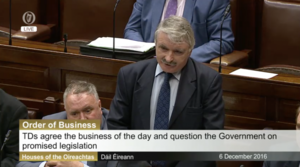 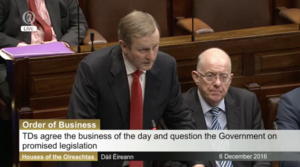 During Order of Business in the Dáil.

Fianna Fáil TD Willie O’Dea asked Taoiseach Enda Kenny if he found it acceptable that “a solvent, profitable company in this country, can change and close down a defined benefit pension scheme, on a whim – to the detriment of their pensioners and deferred pensioners”?

Readers will note that Mr O’Dea didn’t specifically name Independent News and Media (INM) and neither did Mr Kenny in his reply to Mr O’Dea….

Willie O’Dea: “There’s an implied recognition in the Programme for Government that the pension problem in this country needs to be dealt with. Now, can I ask you: do you find it acceptable that a solvent, profitable company in this country, can change and close down a defined benefit pension scheme, on a whim – to the detriment of their pensioners and deferred pensioners and there is no provision in Irish law to deal with it. Can you tell me when such a provision will be put in place?”

Enda Kenny: “There is no law, no legislation governing this, in respect of Ireland. As you know, there are two defined benefit pensions in respect of the case that you’re probably referring to. In Britain, they have a defined benefit which is based upon levies and only becomes of, only becomes, is only used when the company involved becomes insolvent. The measure, company, we refer to now, is not insolvent. This is a matter in respect of defined benefit contributions that has caused quite a difficultly, a number of difficulties, over the period. Obviously, the last actual certificates filled by defined benefit schemes with the Pensions Authority show that over 60 per cent meet the standard and the remaining schemes had recovery plans. And there is concern that the certificates due in the coming months will, however, show significant deterioration.”

“The operation of a pension scheme is, in the first instance, a matter for the trustees of the particular scheme. The minister met recently with the chairperson of the Pensions Authority. He’s asked the authority to report back to him with an assessment of the current overall position in relation to defined benefit schemes. So he will report to the House when that comes back.” 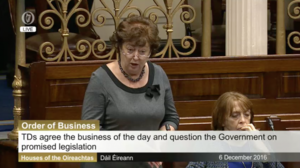 Catherine Murphy: “…Taoiseach, do you now accept that there is a gap in the law that is leaving a group of people, we’re seeing with one company, INM, the Independent newspapers, we’re seeing them – whom have the benefit, mind you, of €130m-plus being written off by AIB and the Bank of Ireland – leaving people who’ve worked in that industry, they’ve deferred their pensions in a lot of cases, leaving them very exposed because of this  gap in the law.”

“There’s an urgency about this and other companies doing exactly the same thing. Taoiseach, do you not see that there is a need for urgent legislation in respect of this gap in the law?”

Kenny: “Well, the point is that, in the UK, there is a pension protection fund which is paid for by levies, but it only comes into use when the company is insolvent and the company you mentioned is not insolvent. Clearly, the…

Ceann Comhairle: “The Taoiseach, without interruption.”

Kenny: “The minister has met with the chairman of the Pensions Authority. He’s asked him to report back on the issue of defined benefit pensions. The situation that will arise over the coming months and coming years, obviously, we’ll deliberate on that when he, when he has that report back…”

Earlier: ‘You Can’t Take It With You’