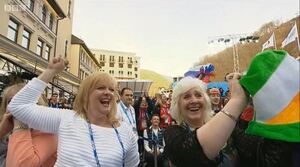 Bangor’s Kelly Gallagher and her guide, Charlotte Evans won Britain’s first ever gold at the Winter Paralympics in Sochi yesterday in the visually impaired Super-G competition.

Her mum, Margaret (above, waving a tricolour leprechaun hat) is from Leitrim and her late father was from Donegal, neither a skiing stronghold.