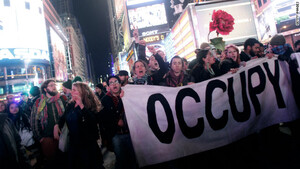 Members of the American Dialect Society came out in record numbers to vote Friday night at the organization’s annual conference, held this year in Portland, Oregon.

“Occupy” won a runoff vote by a whopping majority, earning more votes than “FOMO” (an acronym for “Fear of Missing Out,” describing anxiety over being inundated by the information on social media) and “the 99%,” (those held to be at a financial or political disadvantage to the top moneymakers, the one-percenters).