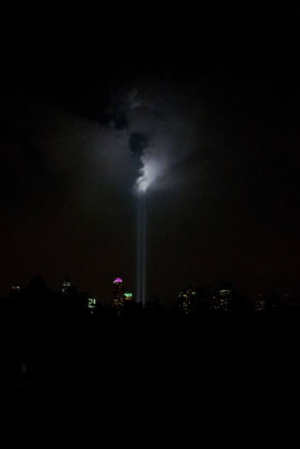 My friend took this in NY last night. Slightly creepy!!!

Previously: For the Day What’s In It Looking south from the top of 1 WTC. Looking down at the Memorial from the top of 1 WTC. The 9/11 Memorial Plaza from the PATH station. Looking up toward 1 WTC from the South Memorial Pool.

The plaza and 9/11 museum pavilion seem nearly complete, and 1 WTC is officially a skyscraper, rising more than 70 stories above Ground Zero and visible for miles around.

We asked Chris Ward, the Executive Director of the Port Authority, how so much had gotten done this year. Through a spokesman, he told us “We are building a city within a city. Three years ago, we decided where this project should be on the 10th Anniversary and every year after. Establish clear goals and priorities, then harness the imagination and ingenuity of our builders – that has been the path to progress.” Those builders now include more than 3,000 construction workers— the most who have ever been working at the site.