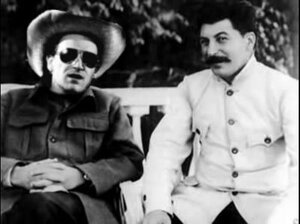 Sorry Nat, are you trying to equate Stalin with Medvedev?

What? Because he met him before a U2 concert. In which a few Amnesty volunteers were arrested and manhandled by Russian secret police. How was he to know that?

And yes he hung with Putin and Blair while G8 protesters were being clubbed on the streets of Genoa. That was 10 years ago. Build a bridge, Nat-tard.

Why does he keep meeting these creeps? Maybe he’s lonely. Maybe he likes shooting the shit with shitheads. The truth is we don’t know. Nobody really knows. You forget one thing, Nat. He’s not like us, the Bonster. He’s a little bit rock ‘n’ roll, a little bit hedge fund, a little bit Sister Stan and a little bit Barry Egan.  The guy lives with these contradictions. Why can’t you, Nat? Why?

Well at least I pay…

Your taxes? Number one, you sign on. Number two, If it was Nick Cave you’d be like ‘Go On Nick. Fuck the system.’  Who’s the hypocrite now, eh? Eh? Eh? Eh, Nat?

Put Churchill’s face back in. Go on.

Bono: ‘Blair Could Have Been Lead Singer Of Aslan’