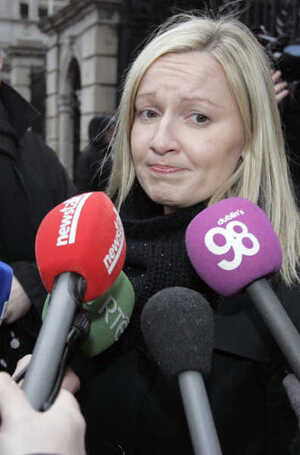 Fine Gael insisted today the views of Dublin South East TD Lucinda Creighton were her own after she was heavily criticised for views she expressed on gay marriage.

Ms Creighton, who is a party spokeswoman on equality issues, said in a Twitter post on Saturday that she believed marriage was “primarily about children, main purpose being to propagate & create”.

Which must please her husband.

Asked for comment on Ms Creighton’s remarks and on the wider policy issue, a Fine Gael spokesman said: “Lucinda Creighton’s comments represent her own personal views. In 2004 Fine Gael was the first political party to call for civil partnership for same sex couples and has been fully supportive of the civil partnership legislation at all times.”

He said that if elected to government, the party was committed to “fully implementing this legislation by making changes to the Finance and Social Welfare Acts to give full effect to the rights afford to civil partners by the Civil Partnership Act 2009”.

He said Fine Gael’s election manifesto commits to this. “It also commits (on page 36) to require schools to anti-bullying policies and, in particular, strategies to combat homophobic bullying.”