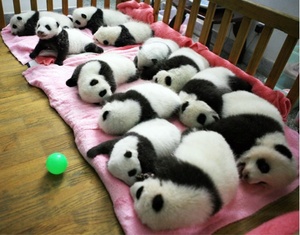 Look at the little fella trying to stand up.

A group of giant panda cubs nap at a nursery at the Giant Panda Breeding Centre in Chengdu, in southwest China’s Sichuan province.

China has launched its once-a-decade panda census. According to the last count, there were 1,596 pandas left in the wild in China, with 1,206 of them living in Sichua.

This Panda: Not Cute, Not Cuddly