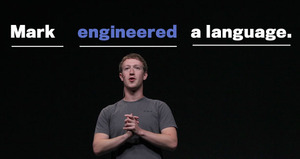 You know how ‘friend’ is a verb now?

Last week, as he paced around the stage at the f8 Developers Conference, Mark Zuckerberg declared with wide-eyed optimism that Facebook was “helping to define a brand-new language for how people connect.” “When we started,” Zuckerberg explained, “the vocabulary was really limited. You could only express a small number of things, like who you were friends with. Then last year, when we introduced the Open Graph, we added nouns, so you could like anything that you wanted.”

And then he delivered the breathless payoff: “This year, we’re adding verbs. We’re going to make it so you can connect to anything in any way you want.” It was all part of “building this language for how people connect,” he said.

READ MORE: The Rise of the Zuckerverb: The New Language of Facebook (The Atlantic)