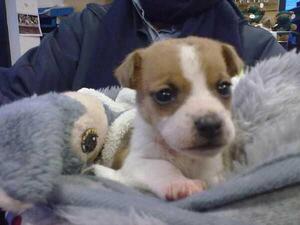 Meet Maurice, the 3-week-Old Jack Russell terrier puppy. The DSPCA received a call on Friday from a member of the public who found this little fella in their back garden. He had been thrown over the wall during the night. It was a wonder he survived the night as temperatures were below freezing.

Help On Its Way [UPDATE]