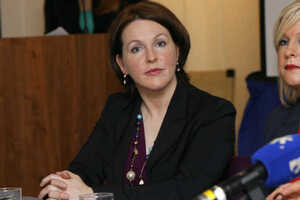 This is all we need.

“There is deep-seated opposition to abortion in Ireland,” said Niamh Ui Bhriain (above) of the Life Institute. “If pro-abortion campaigners believe that Irish people are behind a move to legalize abortion, bring on the referendum.”

There has long been a concern that joining the European Union would eventually lead to more liberal abortion legislation. When Ireland signed the Maastricht Treaty in 1991, it inserted a clause to safeguard Irish abortion laws from E.U. interference.

For anti-abortion groups, the European human rights court ruling has confirmed their fears, particularly when the country as a whole is beholden to international financial help to keep afloat.

“At this time, when the E.U. and I.M.F. are actually running our country and we have lost every bit of sovereignty, the last thing people want is an outside agency making an intrusive judgement,” said Ms. Bhriain. “What we are seeing here is abortion campaigners using external courts in a bid to have abortion imposed on Irish people. If our laws make us different from everyone else in the European Union, I am glad of that difference.”

This Is What They’re Discussing