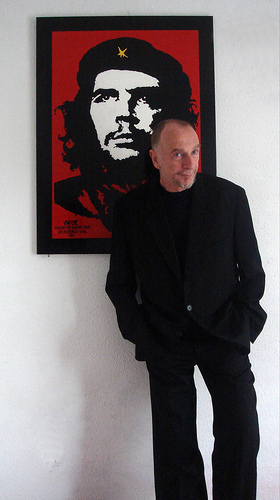 Jim Fitzpatrick who created the genuinely iconic Che Guevara poster (above) in 1968 (based on a photo by Alberto Korda) has written to today’s Irish Times to take Declan Ganley to task over his opposition to a memorial to the revolutionary in Galway.

It was ever thus.

“But Ireland was the weirdest: Every shop that stocked the poster was threatened or harassed: in the very fashionable Brown Thomas of Grafton Street, which sold cards and posters in those faraway days, a well-turned out lady bought the entire stock, tore them all to pieces in front of the astonished staff and walked out! I remember the late Ms O’Flaherty and Ms King of Parsons Bookshop on Baggot Street bridge [Dublin], who were great supporters of my art – as they were of every artist and writer in Dublin – getting really upset at the hostility directed towards the poster, which hung proudly in their front window. Despite threats to break their windows they refused to take it down and I was so proud every time I passed that little shop run by two most educated, kind and most educated, kind and charming Dubliners who devoted their lives to the artists and writers of this city. “

The T-Shirt Designer Hall of Fame