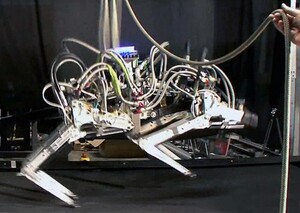 The Cheetah robot – developed by Pentagon military research agency DARPA – can run at 18mph: just 5mph faster than the previous record set in 1989, but plenty quick enough to run most humans down prior to destroying them.

The robot’s movements are patterned after those of fast-running animals in nature. The robot increases its stride and running speed by flexing and un-flexing its back on each step, much as an actual cheetah does.

The current version of the Cheetah robot runs on a laboratory treadmill where it is powered by an off-board hydraulic pump, and uses a boom-like device to keep it running in the center of the treadmill. Testing of a free-running prototype is planned for later this year.

Drunkbot Makes His Way Home From The Pub