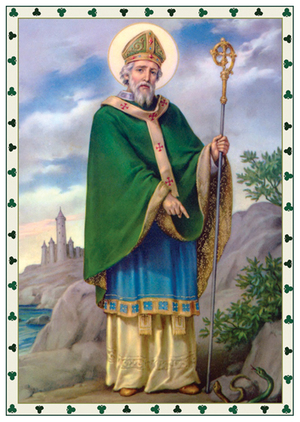 Given the week that’s in it your readers might be interested in a historyhub.ie podcast by UCD School of History and Archives lecturer Dr Elva Johnston entitled ‘Saint Patrick: The Historical Man and the Popular Myth.

In the podcast Elva argues that:

‘Saint Patrick has been a figure of legend for over one and a half thousand years and the legend is so powerful that the real man has become lost….The real Patrick was a figure of controversy in Britain rather than the perfect saint which is depicted in the legend. One reason for this is that Patrick tells us that at the age of 15 he committed a sin and as he says this was a sin that was committed in ‘a single hour in a single day’ – cue a lot of speculation as to the nature of Patrick’s sin. He tells this sin to his best friend and his best friend shatters Patrick’s confidentiality and makes it widely known among the hierarchy of the British church. As a result of this, British churchmen…seem to have rejected his wish to become a missionary in Ireland with their official sanction. Despite the fact that he is rejected by the British hierarchy he does go to Ireland as a bishop…probably a self-proclaimed bishop and he certainly was not made a bishop by the Pope as the later Irish legend tells us…’

This Will Tend To Freak You Out