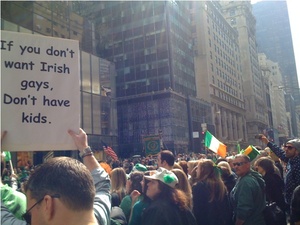 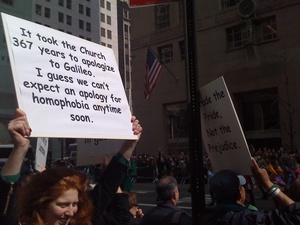 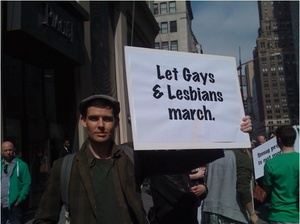 I was walking down Fifth Avenue, New York, to see the parade for the first time and spotted a tiny St Patrick’s Day gay protest, (the LGBT community are still not represented in the parade ). I thought the first picture I took from my phone of the protest sign was nice (see pic 1). Then I decided to grab a sign and join in ( see pic 3).

After chatting to the other protesters it turned out I was the only one at the protest who was actually Irish and gay! The rest were  just passing by and decided to grab a sign and join in :-)  Thought that was charming.  Oh and that red-headed girl (pic 2) was from the Netherlands. Here’s to firsts!