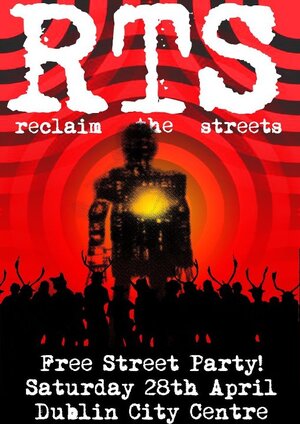 Location and times to be announced.

‘Reclaim the Streets’ was a concept which existed internationally [a decade ago]. In Dublin it was a loose coming together of different individuals committed to anti authoritarian and non hierarchal organising.
The collective will emerge from the disgruntled, the city’s messers and tricksters, all those bored and sick of this age of austerity, ravers, rockers, buskers, artists, the unemployed, trade unionists, wage slaves, wee ones and the retired. We really hope that you will get involved.

There May be Bangin’ Choons