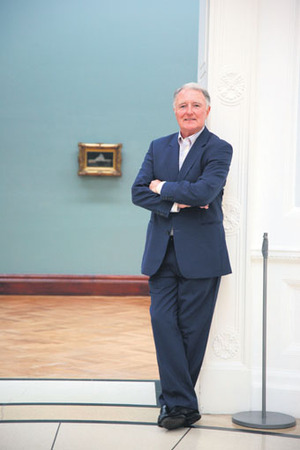 The transmission time, 10.15 at night, was also an issue for me. Here we have the Cromwellian edict of arts programming being banished into the Connacht of broadcasting, ie, at, or past most people’s bedtime. Look at The Works. I never have, not because it’s not a fine programme, (I believe it is just that), but because it’s on too late.

On the night Masterpiece was transmitted it was preceded at peak time (9.30) by the most excruciating boring Prime Time on record – two semi-coherent wannabe front-benchers shouting at each other about the water charges, and a thrilling dead-handed exposition on internet copyright piracy. There, I thought is where the Cromwellian edict should be enforced.

Can you guess who they were?

Overall, it [Masterpiece] was a nice bit of event television. Unfortunately, like much Irish arts programming, Masterpiece was scheduled late at night. It’s only a matter of time before RTE arts shows aren’t even on television, but are placed in a box, buried in a secret location and then found using cryptic clues left in the RTE Guide.