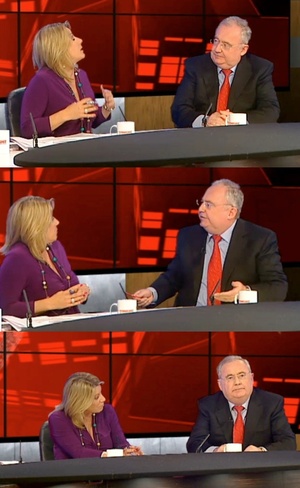 It began in unusually sour fashion.

Vincent Browne: “My criticism of you [Pat Rabbitte] in this regard and I’m sorry to be referring to what I wrote because a lot of our viewers won’t have read what I wrote or be interested in what I wrote but my criticism of you in this regard was that, under the Broadcasting Authority Act the inquiry that could be undertaken by the BAI would, was necessarily of a restricted nature, it could inquiry only into the making of the programme. It couldn’t have gone on beyond then to look at how RTE handled the affair after the programme was broadcast. And in my opinion, and the opinion of many others, what RTE did subsequent to the broadcast was almost as grievous as what it did in the broadcast.”

Pat Rabbitte: “Well what I was concerned about Vincent was, when I called for the inquiry to be held, was the wrongdoing done to Fr Reynolds, that was my concern. And it was a matter for the Broadcasting Authority in convening the compliance committee to use the powers available to it, by statute, to have an investigation.”

Browne: “But do you take my point that it could, that the BAI had the authority to inquire up to, only up to the time of the broadcast.”

Browne: “It couldn’t go beyond that. And what happened. The unfairness to Kevin Reynolds extended beyond the broadcast. The way they handled the representations made on behalf subsequent to then was also an abuse.”

Rabbitte: “Well I think the Director General has given a very truthful explanation of why that hiatus occurred.”

Rabbitte: “Now, hold on, hold on. If you want to answer the questions for me as well, this will be a very short show because you’ll be on your own. If you ask me a question allow me answer it. You know the concern was the wrong done to the priest. Now, as regards what happened thereafter, you know there were difficulties about the taking of the paternity test. The programme makers remained fervent in their conviction, that what they had done was justified. The young woman didn’t turn up for the first paternity test, the second one might have been of dubious value in court. So in fact it was the beginning of September before they got the paternity tests that would stand up. Now having said all that Vincent and I’ve discussed this with the Chairman of the Broadcasting Authority, I think you have a point about..This is the first time that the Act has been invoked in this way and I think you have a point about that particular constraint. I’m also somewhat concerned about the constraint in the Act that requires a complaint to be lodged with the broadcaster within 30 days. And I’ve talked to Bob Collins about whether.”

Browne: “Bob Collins being the chairman of the BAI and, incidentally, former Director General of RTE.”

Rabbitte: “That’s right, chairman of the BAI..That when this controversy is over, some refurbishment of the law, or some tweaking of the law may be necessary.”

Rabbitte: “And we’ll have a look at that.”

Carol Hunt: “I’m delighted at the refreshing innocence of the minister here about…”

Hunt: “No not Jedward, about [RTE Board chairman] Mr [Tom] Savage. Just to go back to the Sunday Independent interview, I think it was Niamh Horan who interviewed Mr Savage, and, beforehand, on November 14, RTE’s head of corporate communications said that they would not be commenting on individual elements of the programme and its production or on the possible outruns of the review activity, pending it’s completion. And that’s because of course, to do so, would be to interfere with due process. Then a fortnight later you had Tom Savage talking to Niamh Horan and saying ‘As far as I’m concerned in all the decisions that were made on Prime Time Ed (Mulhall) would have been, that what I would call, the ultimate court of judgement and appeal’. And when he was asked specifically about who had the final call on the programme in question, he said ‘Oh well in this case Ed. Oh, absolutely’. Now Mr Savage is a very, very canny PR man. He must have known what he was doing. And if the minister says that he doesn’t think there was anything just a little bit maybe calculated about coming in at that time.”

Browne: “Can I just follow through on a point made by Pat Rabbitte there a moment ago. Isn’t there something refreshing about somebody, in a position as he is, actually saying it straight out. Instead of the usual old waffle that you get and ‘no comment’ and all that.”

Hunt: “OK. Well I would have to wonder at that. That the buck stopped at the News Editor. That the journalist got the blame. That the News Editor got the blame. That the buck did not go any further. And you minister yourself said, at the time, you know that ‘shoddy, unprofessional, cavalier piece of work’. That’s what you said about the Prime Time Investigation. Now you were, I  remember, called to be a witness I think in a libel action over comments you made in an RTE news programme about that time. Now they settled but I think it was on the same day that you made those comments.”

Hunt: “Now that would, you know, that would have been…”

Hunt: “Distracting, distracting for you.”

Rabbitte: “It would what?”

Hunt: “It would have been distracting for you.”

Rabbitte: “It wasn’t distracting for me. I do several things in a day.”

Rabbitte: “Whatever you’re insinuating, say it.”

Hunt: “No I’m not insinuating anything.”

Rabbitte: “Well if you’re not insinuating anything then, withdraw it.”

Rabbitte: “What are you implying?”

Hunt: “What I’m saying is why did you at one stage think that it was so shoddy, so unprofessional, you called everybody in at 8am.”

Hunt: “And yet there should be no resignation.”

Hunt: “Uh-huh, and what are you going to do about it?”

Rabbitte: “And you tell me now what the innuendo is about the libel action.”

Rabbitte: “Why bring it up?”

Rabbitte: “So what? Many things happened on the same day.”

Hunt: “And what are you going to do about it?”

Rabbitte: “What am I going to do about what?”

Browne: “Carol I think Pat has a reasonable query, what is the relevance of this other libel action to the issue that we’re talking about?”

Browne: “But lots of things happen on the same day. You choose to make reference to this and presumably because, in your opinion, has some relevance to the other issue.”

Hunt: “No it happened on the same day, it was something that…”

Browne: “It’s not believable that you just choose to say this incidentally without thinking that it had some relevance to what we’re talking about.”

Hunt: “No, it happened on the same day, I was doing some research and I thought that that”

Browne: “Oh come on that’s disingenuous. It’s quite clear that you inferred that it had some relevance to the other matter.”

Hunt: “No cause I don’t know actually where, which came first, the shoddy, the unprofessional or the cavalier piece of work. But I wanted to know…”
[Talk over each other}

Hunt: “What I want to know is why you changed your…”

Hunt: “Why you changed your mind?”

Rabbitte: “I changed nothing.”

Hunt: “But why did you change your mind?”

Rabbitte: “I changed nothing. When I said the report exposed a shoddy, unprofessional piece of work I repeat that now, I repeated it then, that it’s been my consistent position. And you come in to this studio, with some kind of Sunday Independent-style innuendo, some kind of innuendo that somehow, the fact that a case that goes back to 2006 and, for which the court fixed a date, is somehow relevant to this. What’s the relevance?”

Hunt: “I think. No. The relevance is only that the two things happened on the same day.”

Rabbitte: “Lots of things happened on the same day.”

Rabbitte: “There was an earthquake in Italy the same date as the Heineken Cup Final.”

Hunt: “Why have you not followed up then on an independent inquiry, when the BAI, when what actually happened to Kevin Reynolds, the hurt, the hurt that happened.“

Rabbitte:  “You’re not to be taken seriously.”

Hunt: “The hurt that happened to him, so much of it happened after, after the case, after the remit of the BAI, so I mean that really has to be investigated.”

Meanwhile, At The Samaritans