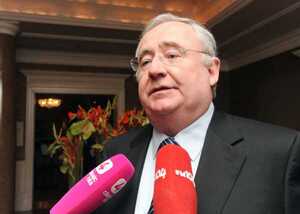 A SENIOR Minister has called for a rerun of the referendum on parliamentary inquiries to ensure there is a proper investigation into the banking collapse.

Minister for Energy and Communications Pat Rabbitte said yesterday that he would like to see the issue put before the people again in a calm and considered manner.

“I am in favour of the Government seeking to run again a referendum that would give a parliamentary committee the proper investigative powers to get to the bottom of what happened in the banks.

He added that Fianna Fáil TD John McGuinness, chairman of the PAC, was probably the wrong person to head an inquiry into the banking collapse. The Minister said the public would have concerns about a former Fianna Fáil minister being in charge of the inquiry.