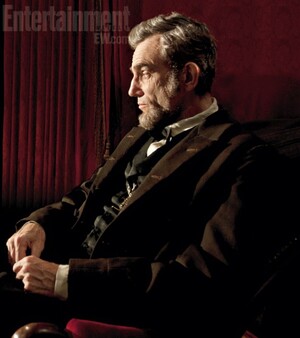 The first official publicity still from Spielberg’s Lincoln biopic. Scotching rumours that Day-Lewis went ‘full-Abe’ in his preparation for the role:

There are numerous reports about Day-Lewis attempting to fully immerse himself in the mindset of someone who lived during the mid-1860s by avoiding the trappings of 21st — not to mention 20th — century life during the shoot, but Spielberg says his star never delved so deeply into character that he refused to acknowledge the modern world. “Daniel was always conscious of his contemporary surroundings,” Spielberg says. “Daniel never went into a fugue state. He did not channel Lincoln. All that stuff is just more about gossip than it is about technique.”