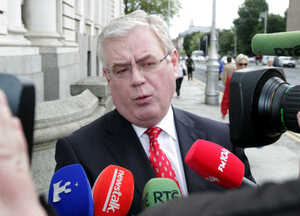 TÁNAISTE EAMON Gilmore has refused to spell out Labour’s position on abortion before the Government-appointed expert group on the contentious issue reports next month.

Oh, go on, Tánaiste. Pop the lid on that coalition-splitting, spittle-flecked can o’ worms…

Mr Gilmore declined to say if he agreed or disagreed with the Labour leader in the Seanad, Senator Ivana Bacik, who insisted recently her party’s official position on abortion was pro-choice.

He said yesterday it was “prudent” to wait for the expert group to report, when asked for Labour’s view.

Earlier this week Minister for Communications Pat Rabbitte said Labour’s position was well-established. “There’s no secret about the position that where the life of the mother is deemed at risk, our position is clear”

Over To You, Dr Casey