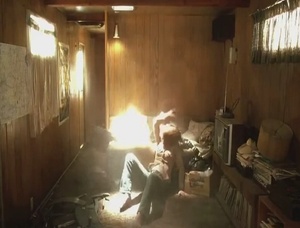 Fight Dub by Eclectic Method. What it says on the tin:

The first rule of Fight Dub is to tell everyone about Fight Dub. Eclectic Method explores the idea of fighting across the frames, mixing fight scenes so characters reach from one movie into another and punch the behoozle out of someone. James Bond steps into Snatch, Adam Sandler knocks out Indiana Jones and Bruce Lee repays Uma Thurman for borrowing his yellow outfit in Kill Bill. Oh and just for good measure, Brad Pitt and Keanu Reeves self-harm. And who can say they never wanted to punch a panda?

Dorothy Mantooth Is A Saint