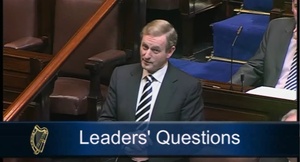 From Leaders’ Questions this morning (In response to a question from Gerry Adams).

Enda Kenny: “Now, Clare County Council made its own decision here, Deputy Adams. And it took the decision to issue letters in relation to the dispersal of the Higher Education grant for this year, and asked, in that letter, for applicants to indicate if the household charge had been paid in respect of the relevant household. And that was in addition to questions that are normally asked by councils on a routine basis, asking in letters about, in relation to payment of other charges, including the non-principal, private residence, water rates and commercial rates, as is appropriate and as apply.
“So the Household Charge question was added in order to facilitate Clare County Council’s information-gathering about who has actually complied with what is a requirement to pay the Household Charge. And I understand that Clare County Council also felt it appropriate to emphasise that the Household Charge is funding local services and local facilities for people in Co Clare. And, as you’re aware, it’s unfair that Neighbour One can say: ‘I’ve paid my charge but you didn’t pay yours and you think you can get away with it’.
“I might say to you that Section 7 of the Local Government Act of 1983,  Deputy Adams, provides that where a sum is due to a local authority, under any enactment, and at the same time another sum is due by the authority, to that person, the former sum may be set against the latter. But I can confirm to you that no monies have been withheld by Clare County Council, in respect of Higher Education grants. I think it’s entirely appropriate Deputy Adams, it’s entirely appropriate that as public monies, as public monies fund the processing of these applications that the local authority is entitled to find out whether Persons X has paid the household charge or not.”