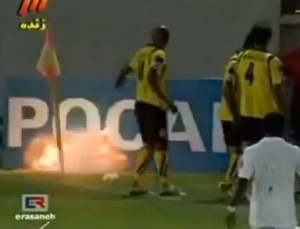 During an Asian Champions League quarter-final between Sepahan and Al Ahli at Iran’s Foolad Shahr Stadium, debris was thrown onto the pitch from the stands. As the referee and linesman inspected it, Sepahan midfielder Adel Kolahkaj picked up a chunk and tossed it to the sideline.

Turned out to be a grenade.

No one was hurt. After a brief security inspection, the game continued.

The Vector Field Of Dreams