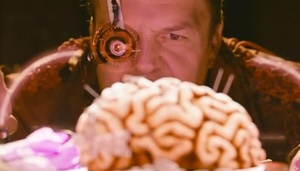 Warriors and scientists join forces to save the world from an embittered humanoid robot in a dystopian Amsterdam.

OK, there’s nothing about that description we didn’t like, but Tears of Steel is a niftily executed sci-fi short in its own right. With the exception of a few lapses into ham and cheese, the VFX and storyline are great.

Just as impressive however, is the fact that the whole production was created using open-source tech and crowd-funding:

All computer effects in the film were modelled and animated using Blender, a suite of open-source 3D content creation tools.Tears of Steel was produced according to open source values. The film was financed with crowdfunding from Blender users, and everything created for the film, including all graphics and the film itself, are free to use and distributed under a Creative Commons Attribution.

In short, a sci-fi that’s genuinely of the future.

This Is How Microsoft Imagines The Future Will Be

Drunkbot Makes His Way Home From The Pub