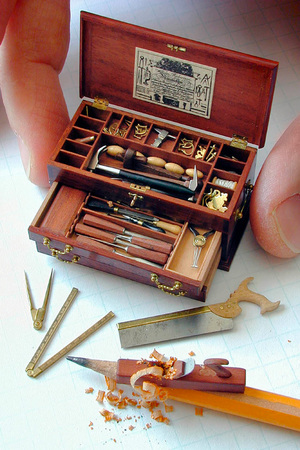 Robertson’s tool chest contains all the same tools that were found in the original. All the tools work, even the plane’s tote (handle) is set a scale 1/8″ to one side as the original. The saw has 160 teeth to the inch. Robinson says that the hardest tool to make was the folding rule with 5 leaf hinge. It is about .030″ thick and hand engraved on boxwood. Things like the shears and dividers also have nice little joints.

Hello? Is This The ISPCA?