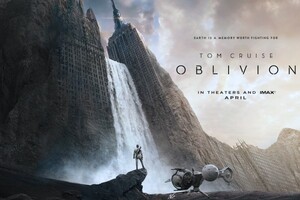 1. The concept: Tom Cruise is Wall-E

2. This is the second Cruise flick in a row where he plays a character
named Jack: we sense a potential Scientologist conspiracy.

3. This is the first of two back-to-back sci-fi epics The Cruiser has
just shot; that Battlefield Earth re-boot can’t be far off.

4. It’s directed by Joseph Kosinski, who did Tron Legacy (2010). He’s doing
another Tron flick next.

5. The female leads are British actress Andrea Riseborough and Seven Psychopaths (2012) star Olga Kurylenko. Even odds says Tom’s married one of them by the time this has opened.

6. They really should include this on the soundtrack.

8. Fact: Risky Business is THIRTY years old next year. Which reminds us
of the best thing its leading man has done this century.