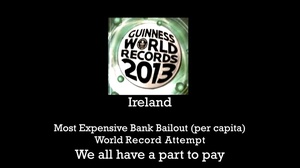 Thank you for your post ‘Notes on a scandal’ (Dec 12th), which highlighted campaign group Debt Justice Action’s concerns about government misinformation on the payment of this years Anglo Promissory Note worth €3.06 billion.

Since then, Debt Justice Action have launched a World Record attempt to have Ireland recognised for achieving the World’s Most Expensive Bondholder Bailout through applying to the Guinness Book of Records. Your readers might enjoy this video and petition to our World Record application:

This World Record attempt has elicited some identical responses from TDs.

The Government continues to create the impression that the March 2012 Promissory Note was not paid. By arguing that payment was ‘deferred’, through the issuing of a bond, the government appears to be claiming that the bond is in some way not an asset carrying value.

The bond used to pay the Anglo Promissory Note is an asset just as cash and bricks and mortar are assets. It is just a different type of payment to cash.

The government initially funded the payment to the IBRC using cash from NAMA (which we own) and we are currently scheduled to repay Bank of Ireland in 2013. It is like paying off credit card debt you hold with one bank with a short-term loan taken out from another bank.

Although the money comes from a second source, the debt is still paid – and the ‘promise made’ to the first bank is fulfilled – the money ‘was’ deleted from the system as scheduled.

It appears the Government is being deliberately disingenuous. The Government must clearly and unambiguously state that this year’s Anglo Promissory Note WAS paid.

Meanwhile, At The Department Of Finance

Notes From A Scandal