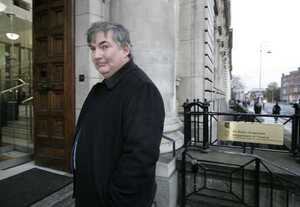 The Irish Independent,today reports that the Government may sell Irish Life to the owner of Canada Life Insurance, Great West Lifeco, “within months”.

You may recall a previously planned sale to Great West Lifeco, which bid €1.1billion for Irish Life, was called off in November 2011.

The collapse in talks was largely blamed on market volatility in the eurozone at the time.

But of course potential buyers had raised concerns surrounding the implications of any investigation into Irish Life’s role in the €7.2billion ‘window dressing’ loans between Irish Life Permanent and Anglo Irish Bank.

Loans which, it is understood, were approved by the former secretary general at the Department of Finance Kevin Cardiff (above), who is now working at the European Court of Auditors.

So presumably the purchasers are satisfied there will be no legal action arising out of these loans. And Kevin can go back to his waffles in peace.

Previously: Kevin’s Gate: The Back To Back Loans

Kevin Cardiff In A Mini