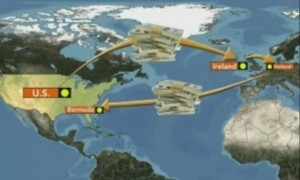 The Irish are slipping into bad company. Tax on profits is 12.5% in Ireland. There are limited write-offs which allow companies to reduce their tax bills to an average effective tax rate of 11.9%, says Enterprise Minister Richard Bruton.

But some US multinationals are paying far lower rates. The reason these companies can build such aggressive tax avoidance strategies is because they exploit agreements between Ireland and other countries

…The authorities here are trying to convince other countries that Ireland is a low tax environment – not a tax haven. It is an important distinction. If all the US multinationals were paying 12.5% corporation tax there would not be a problem. But they are not.

The unanswered question is whether closing the loophole could result in some US multinationals quitting Ireland. If some did leave, it would mean the constant refrain that they came to Ireland because of our “young educated workforce” is hokum.

A Sense Of Entitlement