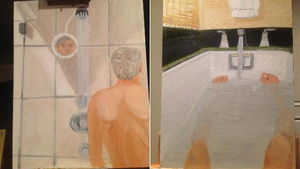 Hacker Guccifer has apparently hacked into six email accounts operated by the family of George W. Bush, publishing many of his finds online including the former president’s attempts at painting, pictures of which he emailed to his sister two months ago.

The undoubted highlight (above) is Dubya’s study of himself taking a bath.

Steve Jobs: Apple To The Core

You Get The General Idea