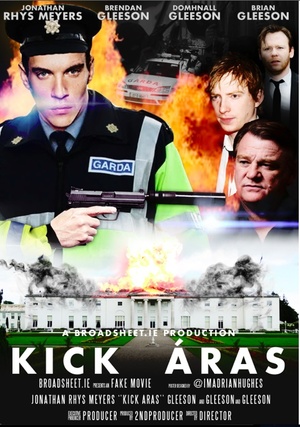 When disgraced Garda Bryan ‘Brian’ O’Brien (Jonathan Rhys Meyers) finds himself trapped in Áras an Uachtaráin after militant bankrupt builder ‘Big’ Jim McMenaminmin (Brendan Gleeson) holds the place to siege, it’s up to him to save the president (Finnoula Flanagan). Armed only with a Garda issue Uzi machine gun and his wits, O’Brien has to contend with McMenaminmin’s tooled-up workforce and the machinations of an oily Junior Minister (Domhnall Gleeson) whipping the media into a frenzy. Co-starring Liam Cunningham as the Garda Commissioner, Charlene McKenna as Bryan’s sassy love interest and Brian Gleeson as Squeebag, Kick Aras reminds us, once and for all, that NOBODY fools with the guards.

Hoth In the Medium Of Baking Soda