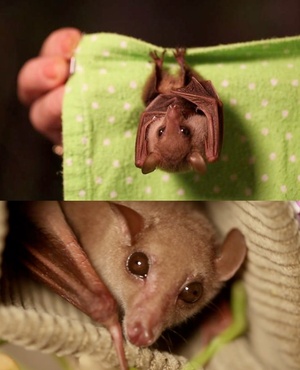 Blossom the Blossom Bat was taken into the care of Louise Saunders at Bat Conservation and Rescue Queensland after a cat attack, nursed back to health and later released on Macleay Island.

But not before her weapons-grade adorability was harvested for teh interwebs.
BCRQ sez:

Blossom Bats are nectar specialists which feed and groom themselves with the aid of their long tongues. They are known to hover in front of flowers as they forage and are important pollinators of many rainforest plants. A baby at the time of arrival, the little bat was fed a nectar mix recipe and the occasional milk formula. Blossom gradually gained weight and began to practice flying during the night. Often she would dart in and out of rooms and even hover above Louise as she slept before retiring to her little brown bag at dawn.

Things You Didn’t Know About The Frog

Things You Didn’t Know About The Octopus