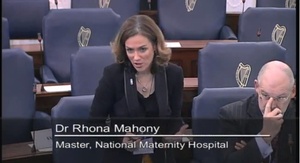 Dr Rhona Mahony (above), Master of the National Maternity Hospital addressed the Join Committee On Health and Children’s hearing on the Expert Group report on the need for abortion legislation yesterday .

This is what she told them:

Dr Rhona Mahony: “ I’m very pleased to accept your invitation to attend today. I wish you every success in addressing what I think is a most important and most complex issue and I hope that I will be of some assistance. It’s my belief that we are all here today with the primary objective of preserving life.

“By way of introduction, I am the master of the National Maternity Hospital in Dublin, I’m a practising obstetrician and I’m also a specialist in foetal and maternal medicine. That means that I have cared for women whose pregnancies are complicated by either maternal or foetal disease.

The National Maternity Hospital is one of the busiest hospitals in Europe and it delivers over 9,000 babies annually, where one in eight babies in the state of Ireland. We are a tertiary referral centre which means we look after some of the most complicated pregnancies in Ireland. In addition to our own hospital population, we look after women referred to us from other obstetric units around the country. These women require additional expertise in dealing with the variety of complications that may arise, either de novo, or as a result of pre-existing maternal disease.

The primary reason for my presence today is to help you understand why it is that we, as doctors, need enhanced legal protection in dealing with clinical situations where a pregnant woman may die and where treatment to save her life may include termination of pregnancy.

I wish to make one thing very clear today. If there is any chance, any chance at all, that a baby will survive at the threshold of viability, every effort will be made to save that baby. That must not be an issue today. Regularly we look after babies at the threshold of viability with excellent results, by international standard. Our neo-natal intensive care is a national resource which cares for babies born as early as 23 weeks gestation and who weigh as little as 500g, even less in some cases.

At the moment in Ireland, doctors practice medicine in relation to pregnancy with a degree of legal uncertainty. It is as far back as 1861 that the Offences Against the Person Act, specifically sections 58 and 59 decreed that abortion in Ireland is a criminal offence, punishable by a life of penal servitude for both the woman and her doctor or anyone who assists her in procuring an abortion. This law remains today. It was to be over 130 years later, before the Supreme Court judged that termination of pregnancy was admissible in the very rare circumstance of a real and substantial risk to the life, as opposed to the health of a mother.

As we all know, the risk to life in this case was the risk of this young girl taking her own life because of her distress at being pregnant. Twenty years later, the anticipated legislation that might have come from this has not been enacted. And, therefore, there is a degree of legal uncertainty in how we interpret the Supreme Court judgement and whether or not the Offences Against the Person Act is, in fact, precedent, it remains law.

In the meantime, it’s quite interesting. We’ve passed a variety of referenda which allow women access to information on termination of pregnancy outside this jurisdiction. Women are allowed…We’ve had a referendum that allows women travel to alternative jurisdiction for termination of pregnancy, despite the fact that such a thing remains a criminal offence within this country.

We’ve twice held referenda to remove suicide ideation as an indication for termination of pregnancy but we have not yet managed, I believe, to address the legal uncertainty surrounding termination of pregnancy in the very narrow, narrow, rare context, where we believe there’s a genuine risk to the life of the woman, where a woman may die as a complication of her pregnancy, that could be saved by terminating her pregnancy.

So, in very rare circumstances, doctors are faced with the task of making highly complex, clinical decisions, based on medical probability but without the luxury of, without the luxury of medical certainty. It is imperative that we have flexibility to do so, to make decisions based on medical fact. It is imperative that we have legal protection to do this.

The State demands of us that we save lives wherever we can and we must do this. This is our job. If a woman is critically ill and it is very obvious that she is likely to die and she will be saved by intervening and treating her and that treatment involves interrupting or terminating the pregnancy, we will not hesitate to do so. And society, women may be absolutely reassured that we will not hesitate to do so.

The difficulty arises when the risk to life is not immediate. And, so for example, the woman who has a serious underlying medical disorder. She may be sitting in front of you now. But the additional burden of the physiology of pregnancy on organs that are already burdened and already challenged – may pose a very significant and substantial risk to her life. Doctors need to have the flexibility to make appropriate, clinical judgement, not based on ideology, not based on philosophy but based on medical circumstance. That is what the State demands of us.

And you know, we must acknowledge, very tragically, sometimes women die during pregnancy. In fact, about eight women out of every 100,000 maternities in Ireland die as a result, during pregnancy. Some of these cases, women may die either because of direct pregnancy complications or they may die from totally incidental causes like a road traffic accident, or they may die of indirect causes, for example they may have a serious underlying morbidity, the additional pregnancy may such challenge her, that she may die.

And, in fact, if we look back at maternal deaths, this country recently produced a report into maternal deaths in Ireland between the years 2009 and 2011. There was six deaths arising directly from pregnancy complications but, double that number, 13 deaths, arising in women who had pre-existing medical disease. Five of these women had pre-existing cardiovascular disease, two of these women died of suicide, two of these women died of flu and a variety of other medical causes, including liver disease and lung disease.

Interestingly, however, it is my experience that in many cases, women with serious, underlying medical disease will choose to continue their pregnancy in the knowledge that they may die. In other words, women will risk their own lives to reproduce. However, some women, faced with a significant risk of their own mortality will not wish to continue their pregnancy and this brings us to the very difficult issue of defining what is a substantial risk to life during pregnancy – a 10% risk? a 50% risk? an 80% risk? a 1% risk of dying?

The interpretation of risk is not the same for all people. And, you know, a woman herself will have a view as to what is an acceptable risk of her dying during pregnancy. Her opinion deserves to be afforded consideration. Clinical flexibility, supported by law is required. Doctors must be able to make sound, common sense, medical decisions based on medical conditions and medical circumstances, not ever on ideology or philosophy. But they must be protected in the law to do that if they are able to carry out their job to the best of their ability and what doctors want to do, and make no mistake, is to preserve life.

This is all about preserving life.

Over the last few months we’ve listened to a wide variety of opinion. Some of this opinion has been extreme and absolute, at times unhelpful and, I would argue, at times, even misleading. I believe this forum will hopefully provide an opportunity for informed and mature debate. I believe the outcome of your important work will underpin society’s wish to protect life as far as possible.

Perhaps the most controversial issue and I bring it up now is that issue of death during pregnancy as a result of suicide. Attempts have been made to confuse the risk of death from suicide by quoting figures relating to death from mental disorder, all mental disorders. Not, specifically, we’re talking here specifically about the very small and tiny number of women who present wishing to take their life during pregnancy.

Now, I’m not a psychiatrist and I absolutely appreciate that you will be addressed later by a specialist in the area of psychiatry and, of course, I defer to them. But could I just say, as a woman, that I’m offended by some of the perjorative and judgemental views that women will manipulate doctors in order to obtain termination of pregnancy, on the basis of fabricated ideas of suicide ideation or intent. There also seems to be an assumption that psychiatrists are unable to assess the issue of suicide ideation, something they do every day in their clinical practice.

Finally. Let’s remember the women and children who’ve brought us here today and yes, I use the word children. The X case. Let nobody in this room forget the circumstances of this case. This is the story of a 14-year-old child who was raped and who found herself pregnant and was so distressed by her circumstance that, at the age of 14, she wished to take her own life. Let nobody forget her because she’s real. Thank you.”